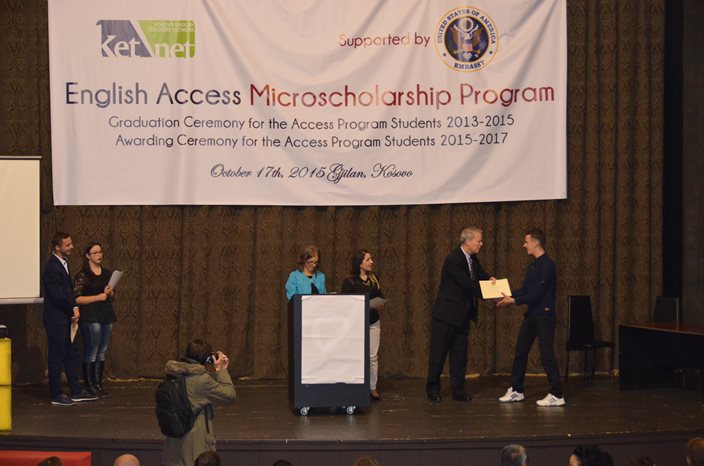 October 17, 2015.  KETNET - Gjilan organized the graduation and awards ceremony of the Access program which more than 40 students from Gjilan and Kamenica were part of for the last two years and which more than 40 students will be participating in for the next 2 years. The ceremony was graced with the presence of many of ACCESS`s most important supporters, including His excellency Ambassador Delawie with his staff, Mr. Mark Naylor, Ms. Michelle Schohn and Ms. Remzije Potoku. From the local government, we had Deputy Mayor of Gjilan – Rexhep Kadriu, Chairperson of the Municipal Assembly – Valentina Bunjaku-Rexhepi, Principals of high school in Gjilan and Kamenica Mr. Xhelal Jetishi, Mr. Qamil Qehaja, representatives of HandiKos and parents of the students.

Access Program has proven that it is a program of unification of our common values. For 2 years, students from different cultural and religious backgrounds have learned about American coulture, democratic values, sensitivities to cultural differences, coupled with the acquired English language skills. During these 2 years, 2 classes of 20 students were the only classes in Kosovo where the Albanians, Serbians and Roma have worked together, learned about each-other`s cultures, created friendships, connections, and all of this was due to Access Program. Over the 360 hours of instruction the students received in the last two years, they learned to use English more proficiently in formal and informal settings, gained professional development skills, and engaged in community-building and service projects. Formative and summative assessment has shown that students have become better candidates for university education in the Balkans and beyond. 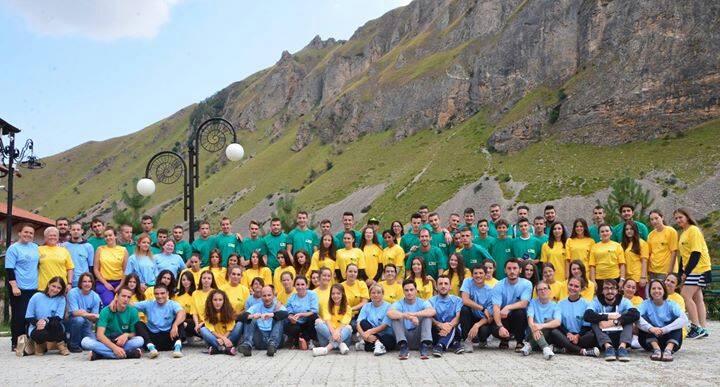 KETNET and program implementers of Community Building Mitrovica (CBM) NGO within Access Program Mitrovica Region and Gjilan organized a Summer Camp in the village Brod, Dragash Kosovo for one week.

The camp is one of the activities of the two year program, financed by US Department of the State, which took place at a hotel in the beautiful Brod Valley where around 90 participants’ staff and students from both respective cities Mitrovica and Gjilan participated.

During the camp students head the opportunity to practice English language, build new friendships and also to listen lectures hosted by speakers from the United States.

Mark Naylor, the Assistant Public Affairs Officer and Remzije Potoku, Education Assistant at the US Embassy, spoke to the students about America’s interest in education and support of Kosovo’s Youth. Country Director for Peace Corps Kosovo, Steven Kurtzy, visited the camp where he joined the students for a mock airplane activity.

During the last three days of the camp the students  learned new English language vocabulary, roasted marshmallows over a bonfire, braided friendship bracelets, and played games ranging from dominoes to American football. Also an official of Education USA-American Advising Centre spoke with students about education opportunities in the US. On the other hand, a group of US Marines headed a Boot Camp’’ to encourage team-building and leadership skills among the camp participants.

The students spent rest of the days playing sports and board games, writing stories in English, presenting the research they did on the history and culture of the different US states. The Access Program Joint Summer Camp concluded with a masquerade ball that took place on the final evening of the camp. 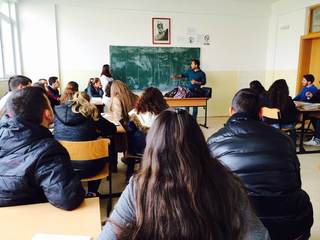 We had a pleasant visit by the Assistant Public Affairs Officer at the U.S. Embassy Prishtina, Kanishka Gangopadhyay at the Access site in Gjilan. Mr. Gangopadhyay, who has taken part in hundreds of panel interviews, was invited to talk to students about dos and don'ts before, during and after the interview. Students were very curious to know about the topic since a large number of them are interested to apply for exchange programs. 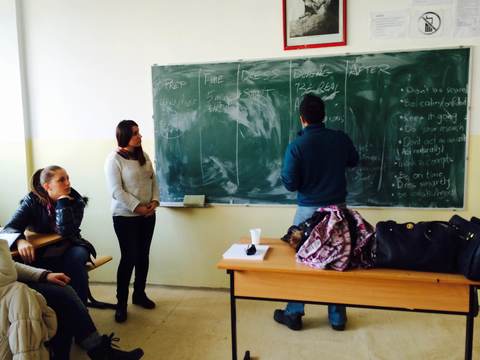 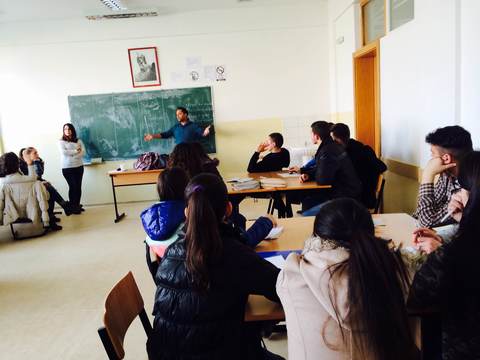 English Access Microscholarship Program (Access)  is an $80.000 project funded by the U.S. Department of State, Bureau of Educational and Cultural Affairs (ECA).

Access is a two year program which provides free English instruction to students who have a minimum or no knowledge of English and who are, in addition, economically disadvantaged.

KETNET applied for this project’s grant in 2013 and it is currently implementing it in Kosovo. On behalf of KETNET, chair of the Project Committee Shpresim Ademaj, and a group of enthusiastic members (Arian Krasniqi, MensureJashari, Dardan Shabani, Fitim Krasniqi, Milazim Behrami, and Kushtrim Morina),supported by the Senior Language Fellow (Stephanie Drotos ),contributed in the compilation of a grant project proposal. The notification of approval was received on June 18th and the project implementation in Gjilan began in November. Two multiethnic classes (20 high school students each) were established and two teachers and two teacher assistants (Mensure Jashari, Arbnora Jakaj, Milica Leštarević, and Slobodan Leštarević) were hired. Each class was assigned a teacher and a teacher’s assistant. The program will end in June 2015 and successful students will be awarded with certificates of completion by the US ambassador in a closing ceremony.

KETNET and Community Building Mitrovica for the first time in Access history in Kosova with the initiative of the Office of English Language Program organized a joint summer camp in Prevalla.The summer camp was part of the Access Program a project sponsored by U.S. Department of State, Bureau of Educational and Cultural Affairs (ECA). The aim of this camp

was to provide English skills, 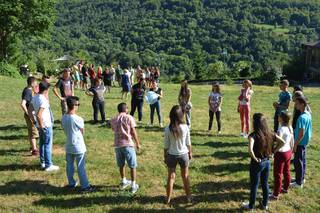 community building, getting to know to American culture and increase their knowledge about democratic values. ECA also assigned two English Language Fellow Officers Kate Mulvey and Daniel Peres to help with facilitating the summer camp. . The camp was coordinated by Kushtrim Morina (Gjilan) and Aferdita Sylaj (Mitrovice) both Access Program coordinators with a staff of ten experienced English teachers from both sides Gjilan and Mitrovica. The camp attendees were 68 ethnically diverse students (Albanian, Serbian, Roma, Goran). Students claimed that this is the first time for them to be at a summer camp far from their families and in such a diverse environment. 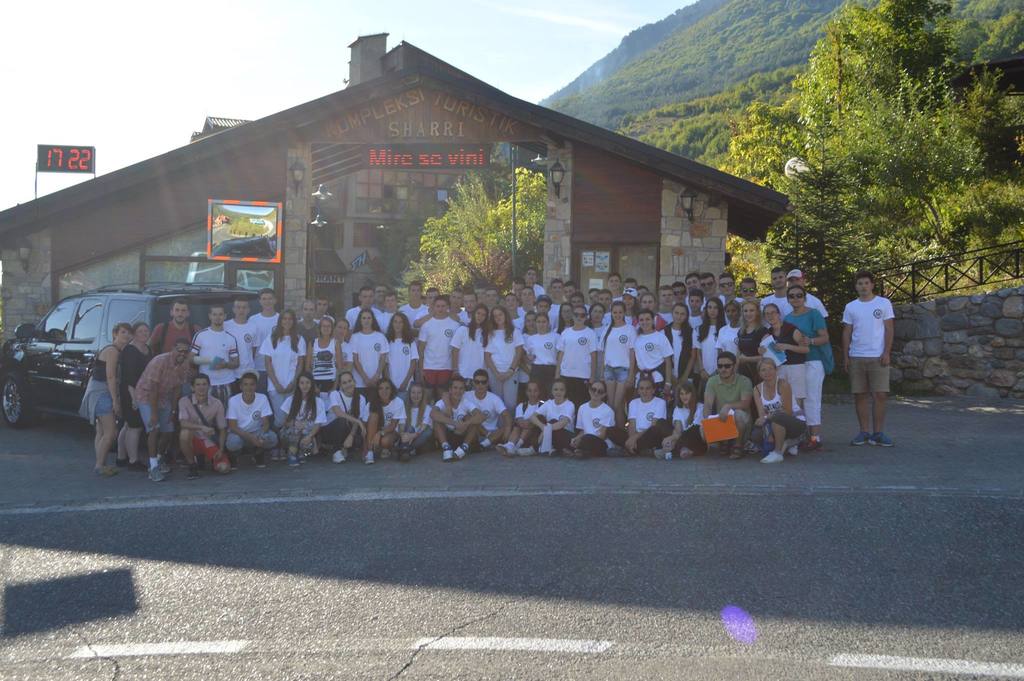